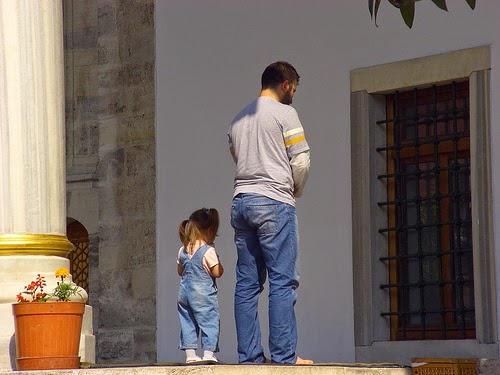 Salam.
This story is an incomplete story based on facts. Only Allah knows what's the ending of the story.
There was once 2 beautiful sisters Tabarakallah. They were the most adorable little things, they were the best gifts any mother could ask for. Their mum called them Hamida and Hadiya. Hamida and Hadiya lived in beautiful house, that their mum had decorated only for them. They loved her to bit and she loved them back, all the same.
Hamida  and Hadiya were quickly growing up and it was time for them to go to nursery. Hamida, by then was now 3 and Hadiya was 2. They started getting more exposed to the world, even though their mum used to take them out  a lot, but they used to mainly go to places full of kids and mums, and never really realised there were other people around them called dads.
Slowly, at school they would see men coming to pick up children, and the children would call the men: "daddy". Then, it hit them, they do have a daddy, yes he comes almost everyday to see them. He doesn't live with them, but he loves them, he picks them up, he holds them and he looks after them. That's what daddies do, and that's also what happen in cartoons and books. Like Peppa, she got Daddy pig or even Red riding hood, she's got her daddy who save her from the big bad wolf. So, this must be their daddy! From that day, they decided to call the man that looks after them Daddy.
But, unknown to them, this man was not their daddy, even though he always answered them when they call him so. No, he wasn't. He was the man who looks after them when mummy is busy, he was the man who would give them gifts, he was the man who would take them out and love them as if they were his own. But what he wasn't, was their dad!
There was a time when they were not born , and their mummy had married a man, a man who affirmed he would lay down his life for his kids, would love them so much that they his kids would love him more than their mummy. This man was the father of Hamida and Hadiya. He was the man who promised to protect his children against anything and anyone that would hurt them. His name was Yahya. Yahya wanted to be the dad his father has never been for him. His father was most of the time out of his life, and even when he was in, did not really show any interest in him, and he hated that.  He promised himself, he would never become his dad. A promise he would fail to keep as the future would tell.
Yahya moved away from Hamida when she was 4 months old and barely tried to keep in touch with her. Yahya and Hamida's mummy went their separate ways when Hamida was 4 months, and Hadiya was still in Mummy's womb. Yahya did not look back at Hamida, she came a few times looking for him, but never found him or would find him for a few minutes and then he would vanish. Hadiya, on the other hand found him for the very first time and the very last time when she was 3 months old. Unfortunately or fortunately, both of them have no recollection of him. But, mummy always tell them about him, as they need to know there was a Yahya, and if one day when they are big enough, they want to venture in the world and find him, then they can cos it's their right!
Back to the present, Hamida and Hadiya are playing with their daddy, and mummy is looking at them and thinking, they could not have chosen a better dad. A dad who selflessly love them, without having a right to, without being asked to and without having a duty to. But there will come a day when they will realise they daddy cannot be their father as he is their uncle (mummy's brother). This man chose to play the role of dad in their life without being asked to and there was their father, who should be playing this role, who have the duty of playing this role, who promised to play this role but never once did he as much glance at them. Mummy might have made a mistake in choosing the wrong dad for them , but they eventually chosethe right daddy who love them as they should be and cherish them.
The story is not over yet, Yahya had moved on and very far, where he has a son, a son he adores and cherish, a son he call his world, a son that means everything to him; but in all this he forgot, he forgot abou his daughters who as he once said were his means to Jannah!


"Whoever takes care of two girls until they reach adulthood - he and I will come (together) on the Day of Resurrection - and he interlaced his fingers (meaning in Paradise)." (Reported by Muslim)
So can there be any greater honor given to daughter and for those who wish to have them and bring them up properly? And he said in another Hadith:

"Whoever has three daughters or sisters, or two daughters of two sisters, and lives along with them in a good manner, and has patience with them, and fears Allah with regard to them will enter Paradise." (Reported by Abu Dawud, Al-Tirmidhee and others)

And in another Hadith: "They will be a shield for him from the Fire." (Reported by Ahmad and Ibn Maajah)

Putting hadith on social network doesn't make you a pious person, it is your actions and deeds that makes you a good Muslim for the akhirah, anyone can be a good Muslims for the dunya by tweeting, facebooking etc but our deeds are recorded on Allah's network and shall be our witnesses on the day of judgement. Fear Allah.