FREEDOM behind the veil 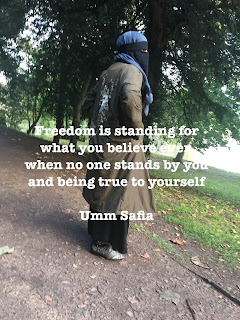 All we really want sometimes is to be truly free. Our daily struggles make it almost impossible to reach this freedom until we reach breaking point and we have to put everything in perspective. What if real freedom is actually separating us from all the life goals,all those milestones we have been setting ourselves to meet the standard of success set by society?

For years I have been busy trying to put the broken pieces back-  what if the pieces are not meant to be put together agin? What if, it was meant to be broken in the first place so that it can be a unique and beautiful piece of work? I told one of my friend once that I’m broken, and her answer was you are a beautiful kind of broken cos you are expensive and no one can really afford you. Bearing in mind that at that time, my friend was having her own crisis and feeling ‘broken’ herself- it hit home at that time- not that what she said meant much- but the simple fact she had something to say to make me want to feel better about myself.

Today’s blog is mainly a thank you, first and foremost to God - the Creator and the Healer and then to all those people who have contributed in a way or the other to shape me - the people who’ve left good memories and those who have also hurt me at times. When we are at a point in life where we feel low, everything else feels negative - but when we manage to drag yourself out of this self-pity mode and look at things - even the negative people in our life has brought about some positivity.

Society has set certain standards and certain rules, culture has also set additional norms to follow and sometimes our value system does not agree with those rules and norms but we want to fit in badly - we feel the need to belong as humans and we try to adhere to those rules and norms set. Then we start living a lie - a life to please others: our parents, our family, our friends, the community and so on- we try to mould ourselves into their mould, but we forget we were not made for these moulds, so failure was guaranteed from the beginning.

We live in a world where everything is materialistic, where relationships have become a business deal - whereby people won’t help you  unless you give something in return; where friendship,love and all relationships have become business dealings of give and take and once you have nothing to give - you are sent to the scrapyard. This can be hard for givers - who were born to give automatically, who were raised to not expect anything in return when they give. As a giver, you are constantly intentionally or unintentionally putting yourself in positions where people will take, to the point where you are drained of giving and you have given too much of yourself- where you are exhausted from putting others’ needs above yours.

A message for givers: you have needs too and you also need to learn to take and find other givers who will give you back and not just take from you. Your kindness is what makes you extraordinary, but your kindness is also what makes you vulnerable. Some people are born takers: everything is a business deal and is about making profit - and if you are not careful, you will end up losing more than you intended to give. Do not let anyone have this power over you without them intending to give you something else in return. It is a selfish world out there and you got to look out for yourself! Learn to say No! Learn to say Enough!

In the process of giving, I’ve lost myself more than once - but i’m glad i’ve learnt to step back and to say No! Enough! For years, I’ve been trying to find myself again - but I was looking in the wrong place all along - I was looking to find myself in a society/community I didn’t belong to. But today, I’ve found myself - and I know I do not belong and never will - my values are too different, my beliefs do not fit in and I certainly would be more unhappy trying to fit than live by what I believe in.

When I was at uni, we had this cartoon picture where friends would tag each other according to the type of characteristics/personality  traits  others thought was closer to them. I remember being tagged as ‘the one who takes no crap’. At that time, I remember laughing about it but never really pondering why everyone agreed to it. But today it makes perfect sense: I was the type of person who would tell you things the way they were whether it offends you or not and I just didn’t let anyone walk over me. I was actually proud of that me- because I stood for what I believed in and what I believed to be right rather than what would be acceptable according to society’s standards. I set the rules back then- I was the Alpha- the pack leader - the one nobody dared to mess with.

But then, life happened and I broke. My ex-husband was warned about me - I warned him myself and people around me warned him - I was too strong for my own good - I was not one to break easily and to put up with nonsense. Maybe, he took it as a challenge and had to prove everyone else wrong. God knows best, but you cannot completely break what God is protecting. Today, I thank God for the bad experience - it has made me even stronger and firmer in my belief. Every experience good or bad counts and make us who we are today, and I wouldn’t be where I am without the bad experience. Some people come into our life to stay, others to teach us a lesson and move on. So, I would like to thank him too for the lesson - my experience of him has taught me a lot and has definitely make me believe that God believed I was stronger than I thought.

Some years back, I used to wear the face veil - something I took on because I wanted to. My family was not keen on the idea though they did not contest it. They believed I was going through some form of extremism in the religion- and truth be told even I started to think maybe I was lately. Wearing the face veil though was not for me to show my piety but it was something I did in my personal journey, something I did to please God as an extra act of worship. Then I found myself alone - raising my daughters; I felt the pressure of finding a job to provide for my family, the pressure of being a single Muslim woman out and about in the street with 2 kids in a non-muslim country and I gave in. I found all the excuses to take it off - to make my life easier.

Today, I realise this was where things started to go downhill. It is just a piece of garment that doesn’t mean much maybe - but it was my decision- it was my faith that I jeopardised it. From then, all the other pieces of clothing became a formality - something that was accepted in the society I was trying to conform to, but it was a lie- a lie I was living as it didn’t represent me - I was not identifying the way I wanted to. I grew tired of 'practsing' Muslims who were completely hollow from inside and wanted and still want to separate myself from them - those cultural muslims who pray 5 times a day, dress like a muslim but who's character did not conform to the teaching of Islam.

For the past few weeks, I asked God to free me rather than to give me something I wanted - I wanted to feel free again and that’s the prayer I made. I attended my Sunday class in the mosque and prayed there and one more time asked God to free me when I come out of the mosque. This time, I felt a relief, I could not wait to be out of the mosque and I went home and as I got home- I texted 2 friends and said I feel like putting my face veil on. One asked me why and the other told me to do it if that’s what I feel like. So I went upstairs and rummaged through my box of clothes and found my face veil and gloves. Just as I was putting them on, my daughters walk in and they both said “Mummy, you look so beautiful like this. I like you like this.”
Part of the reason I had given to myself before to take it off was about their safety - what if I get attacked while they are with me? But their little sentences struck home, so I looked up in the mirror and I recognised the person I was looking at - it was someone I have seen before and someone I was proud to be. It was then that I realised this is who I was looking for all along. It was God who protected me all along , not men.

So, I took them to the park with their scooters, we ran like crazy - had a race which I lost, but we haven’t had that much fun together in a while - they didn’t care I looked different - they valued me for being who I was - their mum. But, I felt FREE from everything that tied me down before. 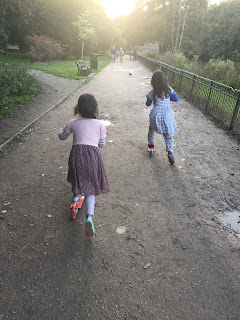 So thank you, to you Miss I - my partner in crime for always supporting me; my family for your support and positive criticism, Yezarck- for being my role model and the big sister I always need and all my friends.
But I will also like to thank those people who intentionally or unintentionally have brought me hurt and pain along the way - cos without you, I would still be struggling to find myself, FREEDOM and PEACE. You as much or maybe even more than others contributed in making me stronger and helping me recognise my true identity. Some people are not meant to stay with us for the rest of the journey but they come into our life to teach us a lesson.