Whenever we are trying to look for a female role-model in Islam, we often are pointed in the direction of how a wonderful wife, daughter and mother the Sahabiyyah were. Nowadays, more than ever we need to know what other roles did they play other than perfecting their role as a mother, daughter and wife. What did they do for themselves? What made them an asset to the society they were living in? How did they contribute to raising the status of women in Islam outside their households?

I will be dedicating a series of blogs to the Sahabiyyah and the roles they played outside their relationship with the men in their families to show that us women do have role models we can look up to in order to aspire us to become the best for ourselves. 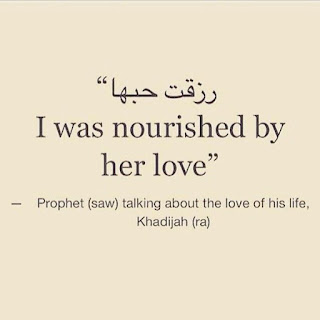 The first wife of the prophet (saw) and the only one till her death.
She is the only wife to have given him children.
The first revert/convert to Islam.

Who was Khadijah (r.a) before she married the prophet (saw)?

Khadija bint Khuwaylid was the daughter of a noble and rich businessman of the Quraysh. She was highly sought  after for marriage due to the high status of her father  and she had been married twice before she married the prophet Muhammad (saw).

Khadija had been married and was a widow, having inherited the money of her late husbands. It is said her second husband was very rich, and after his death, she inherited all of his money and business.

Khadija was a smart woman brought up in a house of a smart and intelligent businessman and undoubtedly benefitted from her father’s knowledge and know-how in the business world.

She was known as Ameerat-Quraysh (“Princess of Quraysh”) and al-Tahira (“The Pure One”) and was a fierce business competitor in a world ruled by men.

She knew how to handle her business single-handedly and appointed many a man to take care of her business dealings which involved a lot of travelling, and which may have been obstacle for her due to her being also a single mother and having the care of her children.

Khadija(r.a) was very clever and could tell she was being swindled by the men she appointed to do the business deals, which involved travelling and trading goods in different parts of the country/world. She knew she was making more profit, but it was not coming back to her as those men would lie about the profit they were making.

She wanted someone honest and she heard about Muhammad Al-Ameen (saw) through her sister, who had previously employed him. Khadijah (r.a), upon hearing about him decided to appoint him as a salesman; but she was also a very intelligent woman, reason being she also sent her servant along with him to make sure she received appropriate feedback about him. She was not one to be conned!

The servant could not stop praising Muhammad (saw) and how he dealt with other people fairly and the manner in which he conducted his business. Moreover, Khadija(r.a) knew she has finally found the honest man she has been looking to conduct her business as she had never made as much profit before with any other salesman.

How did she propose to the prophet Muhammad (saw)?

We consider ourselves to be living in a ‘modern’ world yet many of us would find it ‘inappropriate’ to approach a man and propose to him.

She was a confident woman, who believed in herself and had the courage to send a marriage proposal to Muhammad (saw) for herself.

She was also a noble woman, and as such, she could not approach him directly to ask the question but instead sent her sister to do the job. She had the courage and yet the shyness (hayah) to ask him for his hand.

She was a rich woman, who even though widowed twice and being a single mother was constantly being showered with marriage proposals from the most affluent men, yet she was not attracted to the money and name of those people. She was a fine woman who could see deeper than that which meets the eye - she had a vision of a better future, a peaceful and happy life with a man who would be her partner and complete her in every aspect of life.

Muhammad (saw) had been a shepherd and he was living with his uncle at that time and did not have any place of his own - he could not afford a wife with whatever he was making and he was not looking into getting married as he knew he would not be able to provide for one fairly. Khadijah (r.a) overlooked this - she did not need a man to save her finances, she needed a man who knew his priorities and was ready to work hard and honestly to meet his needs. She saw what he could do and believed in him even before she married him. She could see that his honesty was going to be the basis of a worthy relationship. Although she had previously decided she had enough of marriages following her two marriages, she knew he was worth it as he was an honest and trustworthy man - a man that deserves to be loved and cared for even though his financial status was not the best!

When told it is Khadija bint Khuwaylid (r.a) that was seeking his hand, the prophet (saw) was shocked - The princess of the Quraysh wanted to marry a poor shepherd! He did not think he was worthy of her, but obviously being the strong woman she was - she wanted him as a companion and she made this clear by sending her sister to ask his hand in marriage. She was determined - she knew what she wanted and she was out to get it, even when the man in question himself had doubts! His poverty did not scare him, nor did the fact she is richer than him make her question whether a man would be willing to live under his wife’s wings.

Who was Khadija (r.a) as the wife of the prophet (saw)?

Khadija (r.a) believed in Muhammad (saw) even when he did not believe in himself. She knew he was the prophet even before he accepted this fact. She was his rock! She was also the one to give him a shoulder to cry on, to give him support and to hold his hand.

She was not just his wife, but she was his best friend, his confident, the one who made him stronger when he felt weak. This shows how emotionally strong she was as a woman. In most relationships, it is the man who plays the ‘strong’ character, but we can clearly see in their love story -  Khadija (r.a) was the one who made Muhammad (saw) even stronger.

She believed so much in Allah and his prophet (saw) that she spent all her wealth in the cause of Allah - doing charity and supporting Muslims through thick and thin.  This shows how selfless she was, she was a giver and gave everything away even when Allah blessed her with immense wealth. She was not scared of being poor even though she always had a comfortable life - she stood for the truth and faced it by staying constantly at her husband’s side.

What is special about Khadija (r.a)?
Allah granted her the status of being the first convert/revert to Islam - a woman was chosen to be given this status.
She is mentioned first in the Hadith related about the 4 best women in Islam due to her patience and resilience.
Allah himself sent her ‘salam’ through Jibril (a.s).
The prophet Muhammad (saw) loved her more than any other wife.

12 reasons she is our role-model?

1. She is the Mother of the Believers.
2. She was a strong, independent and self-reliant businesswoman.
3. She was a clever woman with sound judgement.
4. She was a successful business woman in a world ruled by men.
5. She did not let the fact that she was a widow and single mother affect her career.
6. She had a vision and a goal and she set out to get it.
7. She loved selflessly and dedicated her wealth to others.
8. She was the rock for the man in her life.
9. She thought with her brain as well as her heart.
10. She was daring, yet respectful.
11. She was not scared of challenges.