These are the words of Allah, he promised us that if we show gratitude to Him, we would not be among the losers. 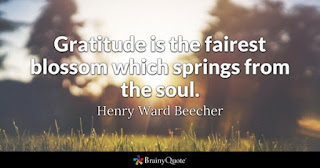 In a world becoming increasingly materialistic, how do we go about raising children who are grateful for what they have? For what has been bestowed to them by Allah’s blessings?

I am a teacher by profession and I have worked with children from the age of 4 to 16 in the past 9 years or so - I have experienced dealing with Muslims and non-Muslims children and as a matter of fact, gratitude is one of the things that over the years I have witnessed being on the decline among today’s youth.

Both my children are born and raised in a first world country where obviously they are surrounded by new technology, new toys and new gadgets - much of the materialistic things that today’s youngsters rely a lot on and consider a must.

Over 6 years ago when I realised I was pregnant with my first child, I had just bought a brand new flat screen 40” TV. One of the first decision I made was to raise my child differently to the children I have been teaching in schools, I wanted to give her something different - my time!

I got rid of the brand new TV and then started my journey of motherhood. Only a few months after her birth, I found myself living as a single mother and also expecting a second child. The first few years of motherhood were the hardest as financially I was not in the best of situation and although I had found a more reliable job following the birth of my 2nd child, the pay was not the best but I was grateful to Allah for getting us through this tough patch.

I wanted my kids to realise how lucky and blessed we were that Allah made sure we had a roof on our head, food on our plates and clothes to wear. I started looking into how I could show my children that although we may not have the best of everything, what we do have is more than we need and Alhumdulillah I found a good and practical way of doing this.

One of my muslim friends started a homeless people project and asked me if I would help out. She was a divorcee and a revert with not much support herself, and who had upon her conversion to Islam experience some sort of homelessness herself. I asked her if she wouldn’t mind if I bring my daughters along (they were aged 2.5 and 3.5 then) as I thought it would be a good way of showing them what life is like for other people. So, we would cook and packed food as well as prepare hygiene packs which had the basic items for grooming and hygiene for the homeless people. Every      Saturday evening, when  people were getting ready for their night outs, we would load our handbags with foods and those survival packs to give out to people. I would rarely hand out any of them, but rather used to let my daughters to do it - the people they gave the things to were obviously dressed  in rags - old, stained, dirty and smelly clothes. They were not the most appealing  looking people - some have not had a hair cuts in months, others have not showered in quite a while and so on. You can pretty much portray the beggars from any old English movie you have seen - many did look exactly like that! It was important for me to teach them that those people ’s appearances did not matter, and they were not ‘ugly’ but instead they were having a difficult time and they had nowhere to live, no where to sleep, no food to eat and so on. I wanted them to be aware of other people’s difficulties and pain so they could see how much better off we are and give thanks to Allah for all we have.

We had fluorescent jackets with the logo of the charity we were helping out and they were oversized for their tiny body, but they loved it - they loved being part of the crew and helping making a difference to other people’s lives. The homeless people were thankful to us for what were doing for them, but I was also thankful and grateful for them to teach my children about appreciating the blessings we have. My kids, even though very young obviously asked questions about what happened to them(the homeless people) and why we needed to help them etc - and this helped to develop empathy in them towards others.

One day, one of the homeless ladies who we had given some food asked me if I wouldn’t mind if she gives something to my kids and if she could hug them. She explained she has not seen her grand children in years and she would just like to hug them for making her day brighter. She had gotten a pack of sweets for them and wanted them to have it. As she gave it to them,I could spot a little tear rolling down the side of her eyes. Maybe my kids could not understand what this one hug meant to her, but I could and I am sure even though they were very young they could feel the love and warmth of that person. Unfortunately, we could not carry on with the project as there was not enough people to give us a hand but even till date - 2 years later, my kids still ask about ‘when are we going to feed the poor people’.

Another anecdote is the old lady selling Big Issue outside our local shop. For years there is this old lady (a refugee) who sells the Big Issue to earn some pennies in order to survive. Since my kids were babies, whenever I go shopping there , I make it a point to buy some extra food or drink item to give to her on our way out. Both my children know we always get her something, and when we are inside the shop, they will ask ‘Mummy can we get her this or that this time?’ I could not tell you how proud of them I feel whenever they do that - they love giving her her little something on the way out. The lady speaks no English, but she has come to recognise me and my daughters and she knows we will always get her something. My youngest once asked me why do we always buy the old lady stuff - I explained that Allah has given us enough to share with others so we can make them happy, then Allah feels happy and give us more.

One day, I was packing away old clothes to give to charity, my daughters walked in and asked me what I was doing - I told them I’m giving away their old clothes to the children who don’t have clothes to wear as their mummy and daddy cannot buy any. My eldest said, ‘What about toys Mummy? Do they have toys?’ I said they probably do not. ‘Can we give them some of the old toys we don’t play with?’  So off they went getting their old toys and packing it away - some were not even old, and some the still played with, but they were so happy about sharing their happiness with other children that they were not bothered about giving toys they actually liked. Some of the toys were a bit tacky, so we went to the shop and got some pencils, colouring books etc to add to the pile so they could also have some ‘new’ things.

My kids do not have the latest gadgets, toys etc but they are happy for what we have and they are thankful to Allah for whatever He gives us. They understand that other children may have certain things we do not have, but they are grateful and happy for what we have and Alhumdulillah never have I experienced them throwing a tantrum for something they want or would like to have.

As a single mother, I must admit money does run low, and sometimes I would like to give them more but we just cannot afford it! But they understand that we have priorities and inshAllah if we have more money then we can have extras from time to time, but they are grateful for whatever I give them and always thanks Allah for it. A ‘jazakhallah khairan’ can go a long way but also the fact as parents if we commit to doing something for them then we actually do it. If we promise to give them something once we are in a better position, then we actually do it!

To finish off I would like to end with a dua my daughters often make when we finish praying:’Oh Allah thank you for everything you have given us, but can you give my mummy more money or give us a new dad who will buy us all the toys in the world. Ameen’

I do pray both duas get accepted inshaAllah.
Posted by Umm Safia at 15:15